Emma Goldman once described Anarchism, in part, as the freedom of the human mind from the dominion of religion. But what does this mean and in what context did she say this? I would like to address this concept here briefly because I find it very relevant to my life.

I want people to look around the world today and throughout history. All of the inquisitions, crusades, War, hatred and intolerance we’ve seen. The most violent place on Earth is the Middle East, the most religious region on planet Earth. The two are directly correlated. Look around at the Xenophobia and hatred modern Muslims face in historically Christian countries. Conversely, look at the actions carried out by die-hard Muslim groups such as the Islamic State. Observe what happened to the Jewish people in WWII, to Pagans following the death of Jesus Christ, to the practices of legal officials and Governments in conjunction with the Malleus Maleficarum or Salem Witchcraft Trials. War, murder, violence and hatred all in the name of religious worship. All throughout history, just as is the case today, humans carry out horrifying and disgusting acts in the name of religion. 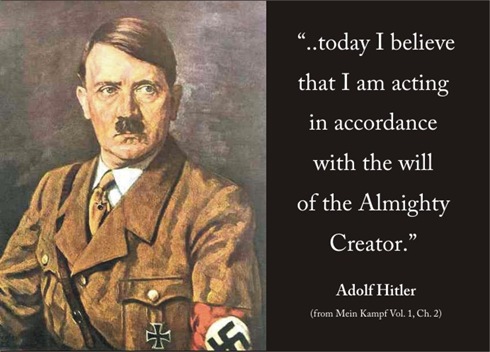 The worst part is that it makes complete sense why religious people do this, and it’s because they are all clinically insane – delusional at best. I mean think about it, people who believe in any one of the 3 Abrahamic religions, which make up the largest groups of religious practitioner worldwide, literally believe that there is an invisibility entity surrounding them at all times everywhere they go. This entity is all seeing, all knowing, has absolute power and can sculpt the world how he sees fit. This entity is also the most “loving” force in existence. But have you looked at the world lately? Have you read a history book? Have you considered everything I just said in the last paragraph? Do you see the sheer hatred and for lake of a better term “evil” that religion inspires?

All of this War, death, destruction and hatred of others is all carried out on behalf of a religion and in the name of God – done for the love of God. Why are people incapable of seeing the truth? If God is all powerful and all loving, why in the Hell would God allow any of this to happen? Why wouldn’t the world be a better and more loving place? What excuse is there for God to not have made the world better than it is or has been? How perverse is God that this is the world he wants and has created for us? Just think for a moment how narcissistic God as an entity must be – if he were real and you believe in him, that is. God gave you life, without you having ever asked for it in the first place, solely so you must worship God – less you be burned and punished and tortured for all eternity if you do not. In other words, according to religious belief, God has only created you to worship him and will only love you if you do just this, otherwise God will just torture you in both this life and the next. What a sadist! Who would possibly want to worship a being like that? Look at what God even did to Job, his most pious follower. In what reality does God constitute love on any level?

Religious people are just sick in the mind, which is why their religious practices are and have been so destructive/violent over time. Religion is a belief held dearly by small minds who cant comprehend the meaning of life or the lives in front of them. Moreover, religion is an excuse for people to not take responsibility for themselves, their life, their actions or the world around them, which is why the world continues to destroy itself and fall apart. Religious people absolve themselves from any accountability. They are the least pragmatic or practical people on planet Earth, because they believe there is some magical being meant to take care of everything for them; they are powerless to do anything. In other words, religion itself is an utterly useless belief and religious practice is nothing more than a waste of time and effort.

I for example am a Schizophrenic who has been committed twice in my life, and even I do not believe in some invisible man that controls every aspect of my life and fate. That’s just nonsense and crazy talk. From a clinical perspective, anyone who believes in God has completely lost touch with reality and are suffering from far worse disillusions then myself. Religious belief is a mental disorder, even if they’ve never been treated for it. However, maybe if we started treating religious people as the psychopaths they are the world would finally start improving and all this irrational madness would begin to go away. As I have always maintained, the world would be a far better and more peaceful place if a belief in God never existed. I’ve also written more extensively about this subject as a brief chapter in my 2018 book. You are invited to read more via the links provided below.

Download Chapter – If God Isn’t Dead Should We Kill Him?: https://creatorstribune.com/wp-content/uploads/2020/12/Religion.pdf